You can start a war. Click on "War Situation Index" and pick your enemy! Make sure you have at least three defensive radar planes to optimize your air defense and also three offensive radar planes so that you can plan your attack in detail. If you attack, aim at the defense units and garrisons first and destroy them, before you attack the target itself. Sometimes it is better not to destroy the target but rather to move your army units past the unprotected target, and occupy large areas of the enemy's country. Make sure you have enough well equipped military units with many offensive weapons and ammunition before you start a war.

Fighting wars is not without consequence, though. Beside the bad image you create for yourself, people in both countries will die and your economy will suffer significantly. If things really turn for the worse, your enemy will gain control over your country and transfer money and people to his/her own country. 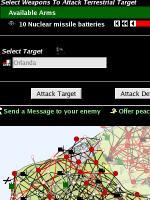 If your country is conquered, it will become part of his (or her) empire and you will have no control. The country will move from your account to the account of your enemy.

There is no other choice than to choose another country, play it better this time and maybe take revenge some day and even regain control over your old country.